Inspiring projects from the archives of the Tile of Spain Awards

Submissions are now being accepted for the 2012 Tile of Spain Awards. Looking for inspiration? Take a look at three of last year’s honorable mentions for architecture and interior design. 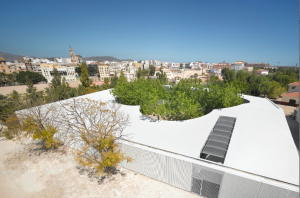 The UPI school in Gandía was designed by architects Paredes Pedrosa based on the location, a formal garden in a park surrounded by large mulberry trees, and the material, cast sections used for the walls and roof.

It is designed to be a light, spherical building marked by the low cost of its construction and maintenance. The large ceramic roof configures the outside and inside of the building. The entrance door, with views over the river, leads to the central, curving patio that connects open spaces, porches and classrooms. 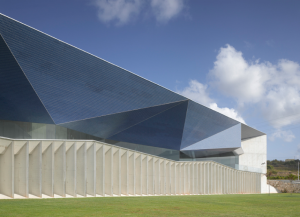 UNA Patxi Mangado project, the Teulada Municipal Auditorium stands in the middle of the cities of Teulada and Moraira in the seaside province of Alicante, Spain. Divided into two separate parts, Teulada-Moraira is regarded as the same town.

Located in a valley that drops down to the sea, the town has not relinquished its seaside or its inland status. The auditorium was designed to symbolize the unification of both towns. 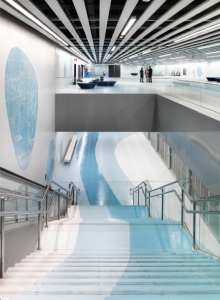 The Fira 2 Metro Station, designed by Toyo Ito & Associates, features a blue color scheme representing the water. The high traffic area and the vibrations caused by the metro led the designers to choose porcelain stoneware tiles for use on walls and floors due to durability, resistance to vandalism and easy maintenance.

Entries for the 11th Annual Tile of Spain Awards are being accepted through October 23, 2012. Learn more about the contest, previous winning projects and how to enter here: http://www.premiosceramica.com/