Levantina y Cumella Ceramica were integral parts of winning projects at the 2014 Coverings Installation & Design (CID) Awards, a program that honors outstanding design and installation of tile and stone in residential, commercial, sustainable and international projects.

The third annual CID Awards were awarded April 30th, 2014 at Coverings, the Ultimate Stone & Tile Experience, in Las Vegas Nevada. A panel of notable editors and leading designers evaluated more than 100 submissions based on execution, original usage, and overall design and purpose, and gave special recognition to those projects exemplifying spectacular tile and stone applications. 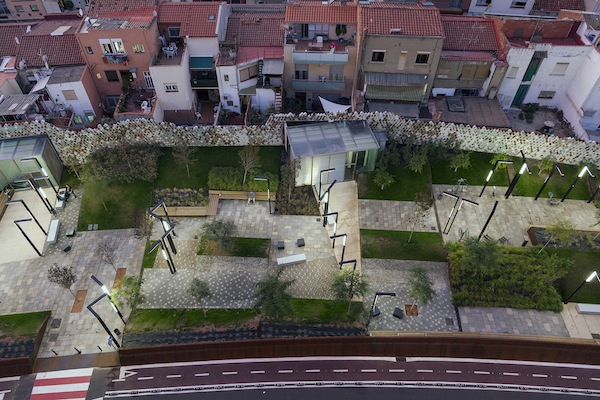 This project is located in one of the most built-up areas of Sant Feliu de Llobregat. This working class neighborhood in Barcelona sprang up around the town’s former industrial district, encircling the textile factories that provided employment for residents who lived in modest housing next to the factories. After the demolition of one of the last remaining factories, an underground car park was built to serve the district known as ‘La Salut’, leaving a large void with a concrete cover on the site where the factory once stood.

The void left by the former factory reveals the once concealed walls of the rear courtyards of the housing blocks and which now form a façade for the new urban space. The decision to use ceramic tiles to clad the existing divisions was practically automatic. Custom made ceramic tile from Ceramica Cumella were fired at high temperatures to provide an affordable material that offered excellent guarantees in terms of ageing and resistance to frost, rain and variations in temperature.

The project clearly reflects the intention to return to the use of ceramic tiles as a means of preserving the memory of the district’s industrial heritage, whilst at the same time echoing the walls of the existing courtyards. 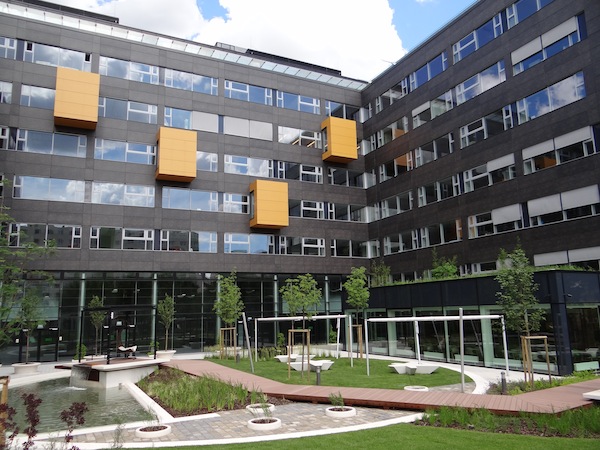 This year a new category emerged for the CID Awards, recognizing sustainable projects. The 2014 winning project was the Green House Building, an eight-story, single-phase office development in central Budapest, designed to achieve LEED Core & Shell Platinum certification, which is the highest accreditation level possible. With the goal of being the first project in Hungary to achieve this rigorous certification, White Arkitekter AB and DPi design Kft., utilized materials that were locally sourced and offered low environmental impact.

The slim ceramic tile from Tile of Spain manufacturer Levantina used for the building’s façade offers a high degree of absorption to protect against inclement weather, sharp changes in temperature and other severe climatic conditions. This tile is also resistant to bending and wear and does not change with UV radiation, which ensures durability and low maintenance over time.

To learn more about Coverings, and the twelve projects honored in the 2014 Coverings Installation & Design Awards program, please visit coverings.com/CID.