Tile of Spain mourns the death of D. Joaquin Piñon, President of ASCER 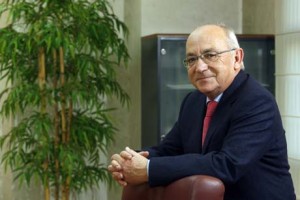 A well-known personality in the ceramic tile industry, Piñon died on July 9, 2013 and is survived by his wife, two children and one grandchild.

Piñon also served as President of ITC-AICE (Ceramic Tile Institute), Vice-President of the Cevisama trade show and a member of the executive committee of Feria Valencia. Throughout his career he collaborated with several companies and entities of the sector.

He was General Manager of his own ceramic tile company, Hijos de Francisco Gaya Forés, since 1976. He came to ASCER in 1998 as vice-president and in 2009 took over as President.

Piñon executed his duties in a responsible, efficient manner, steering the association through complex economic times for the industry, seeing how some companies were forced to down-size and others to close their doors after many years of operation.

One of his accomplishments during his term as president of ASCER was the antidumping investigation of China towards imports to the European Union; which resulted in the signing of a labor treaty adhering to new ordinances.

Piñon was a strong champion of the sector and the Ceramic Tile Institute, playing an important role in the development and advancement of the industry, looking for feasible solutions for the future of ITC. A defender of the industry, his strong convictions, clear vision and belief in the power of collective thinking will be sorely missed.

Sobre Azulejo de España
In Spain, tile makers labor as they have for centuries – pushing their passion for design and innovation to new levels of artisanship. With one of the purest and strongest domestic clays available, Spanish manufacturers have an unparalleled ability to make the end product more diverse. From rustic handmade forms; to technical facades that cool buildings and clean the air; to the impossibly slim, sustainable recycled and ink jet masterpieces that fire the imagination. The Spanish Ceramic Tile Manufacturers’ Association (ASCER) is the private organization whose primary objective is to support Spain’s ceramic tile manufacturers and the industry as a whole by stewarding and promoting the Tile of Spain brand worldwide. A strong global leader, the ceramic tile industry of Spain comprises 125 manufacturers concentrated primarily in the province of Castellón. For more about tile produced in Spain, contact Tile of Spain Center at the Trade Commission of Spain, 2655 Le Jeune Road, Suite 1114, Coral Gables, FL 33134. Call 305-446-4387 or visit tileofspainusa.com.