Olympic gymnastic competition may just now be wrapping up in London, but it was 20 years ago that Tile of Spain was part of the event. When the Summer Olympic games came to Barcelona in 1992, Tile of Spain played an important role in the construction of the Palau Sant Jordi, considered to be one of the most interesting buildings from that decade.

The arena designed, by Japanese architect Arata Isozaki, was used for the 1992 Olympic Gymnastics competition and holds up to 20,000 people.  It has since been used for everything from swimming competitions to big name music concerts. Just recently, on July 24th 2012, it hosted a pre-Olympics Spain v. USA basketball match.

Palau Sant Jordi is a simple oval with a connecting auxiliary pavilion. The crown of the building is the turtle shell roof made out with ceramic tiles. It is a concave, non-symmetrical dome, designed by Japanese engineer Mamoru Kawaguchi and considered as an extraordinary piece of work in engineering.

The structure is made up of a huge metal net that supports a thin cover of ceramic tiles developed by the Tile of Spain company Gres de Valls, and the zinc sheets included for waterproofing.  The result is this surprisingly design, constructed of more than 1500 spheres, 3200 bars, and 600,000 metal-gray ceramic tiles, was assembled on the ground then lifted to its current height of 45 meters using cranes and hydraulic lifts.

The lifting process itself took ten days to complete. The Palau’s unique skylights and versatility make it a true gem of the Barcelona Olympic Ring Complex even today. 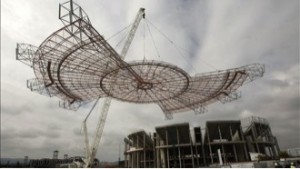 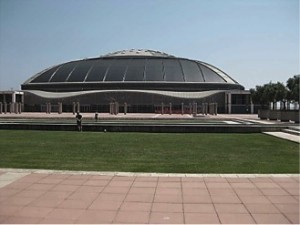