This post originally appeared on Metropolis, written by Dora Vanette.

Tile manufacturing, an industry with over 2,000 years of history, has had a remarkably energetic past thirty years. The recent innovation boom began in the 1980s, when the invention of roller kilns sped up the process of firing tile; what once took a full day could now take mere hours. The advent of rectified tile in the 90s—thanks to a new process where tile is cut on all sides—meant produced pieces could be identical and patterns or textures could fill the entire surface of the tile. 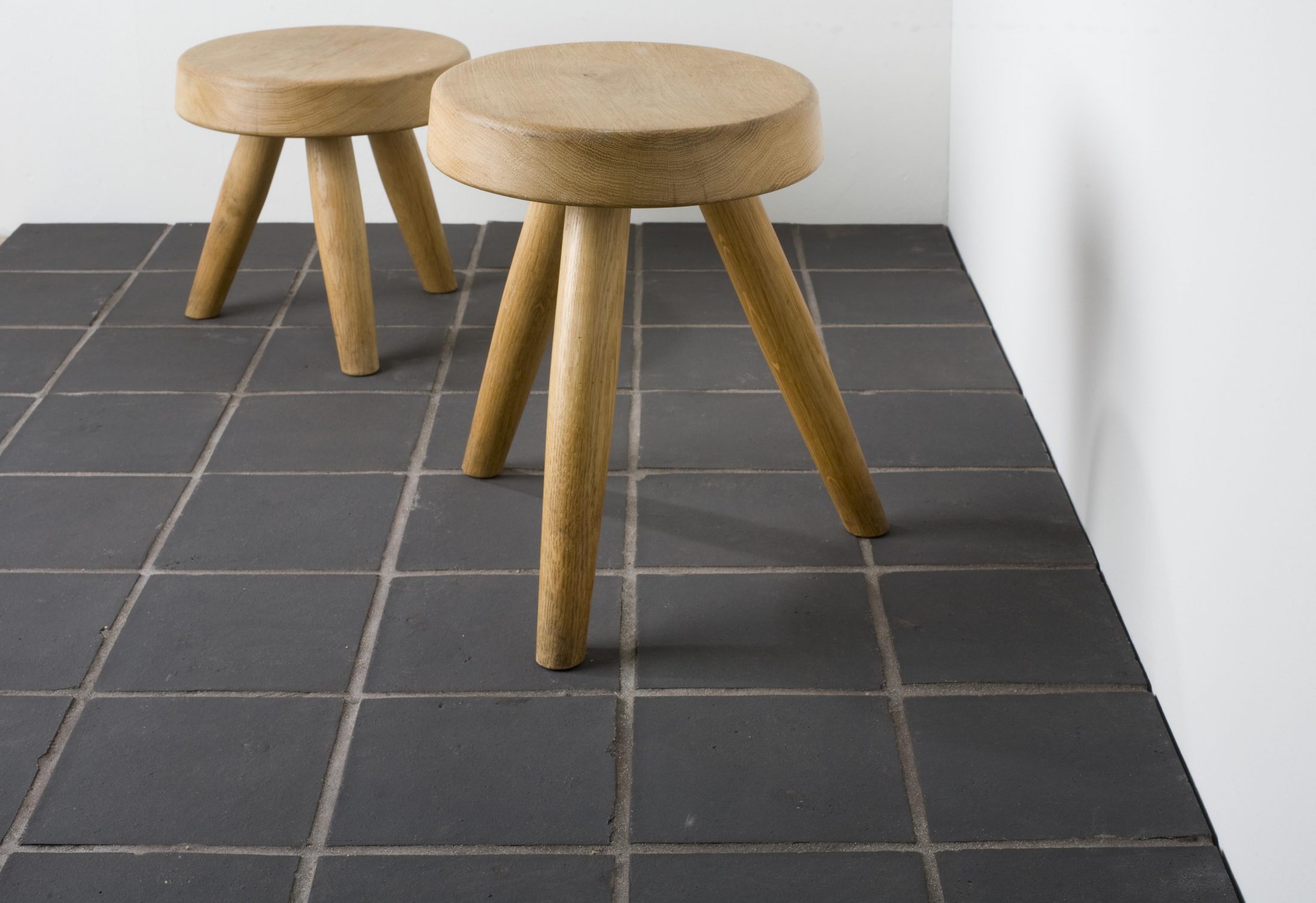 The last two decades have been marked by the industry’s attempts to improve the decorative aspects of ceramic manufacture, as roto-color and inkjet technologies have allowed surface decoration to be applied more accurately and evenly than was possible with more traditional methods such as screen printing. The increased capabilities of tile factories have translated to more dynamic production processes and lowered costs for both manufacturers and consumers, all the while conserving energy, water, and raw materials.

Despite the rapid progression of technology, the industry’s interest in the rich history of tile has remained firm. Spain, in particular, has upheld its tradition of family owned factories which combine advanced technologies with artisanal techniques. Metropolis spoke to Tile of Spain consultant Ryan Fasan about some enduring styles in ceramics and and how historic motifs have been adapted to suit today’s technologies and needs. 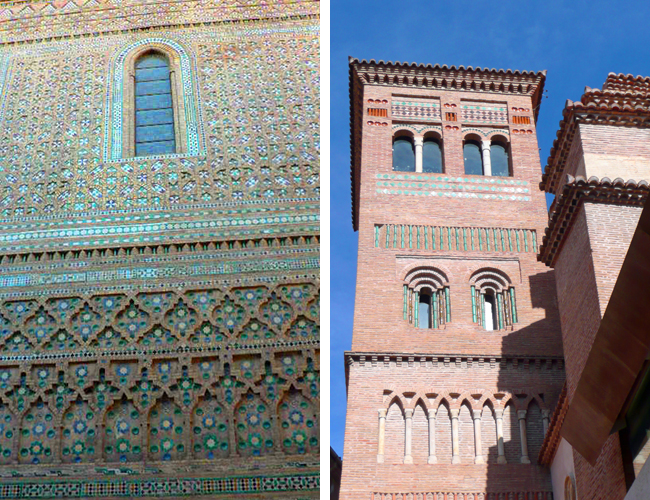 Ryan Fasan (RF): During Moorish rule in Spain many buildings were built using very ornamental brickwork. Although the Moors were increasingly pushed out of the Iberian Peninsula beginning with the 12th century, some builders remained in the area and began erecting churches and public buildings in their style of architecture, but complementing it with Spanish glazed mosaic tile, creating a hybrid style of architecture called Mudejar. 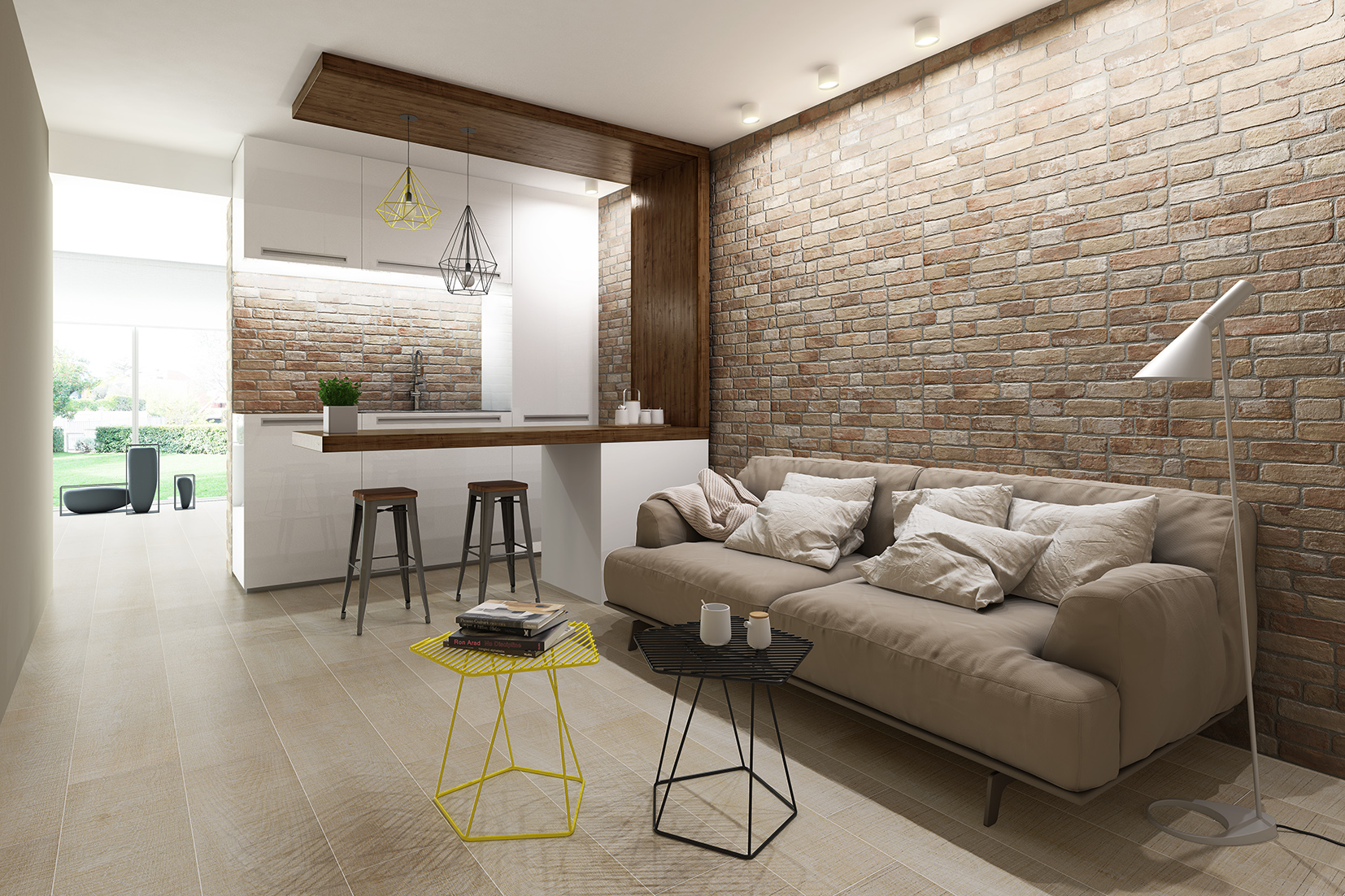 About 3 years ago an interest in brick reemerged in the tile industry. Some manufacturers are now creating a very traditional brick texture with ink-jet screening, replicating the look of ancient salvaged brick. Other manufacturers are taking handmade bricks and casting molds of them in order to make mass-produced tile that retains the shape and the irregularities of handmade ceramics.

RF: Historically, cement pavers were frequently used across Europe. Currently there is a huge boom in 2cm (5/8”) thick pavers being made in ceramics, which is twice the thickness of a normal ceramic tile. The interest in ceramic pavers came on slowly, as manufacturers were unsure about shipping tile that is twice as heavy. But as soon as landscape companies started working with them they realized ceramic pavers are easier to cut, they’re lighter than their traditional stone and cement counterparts, and in a lot of cases they’re the same price or even less expensive. 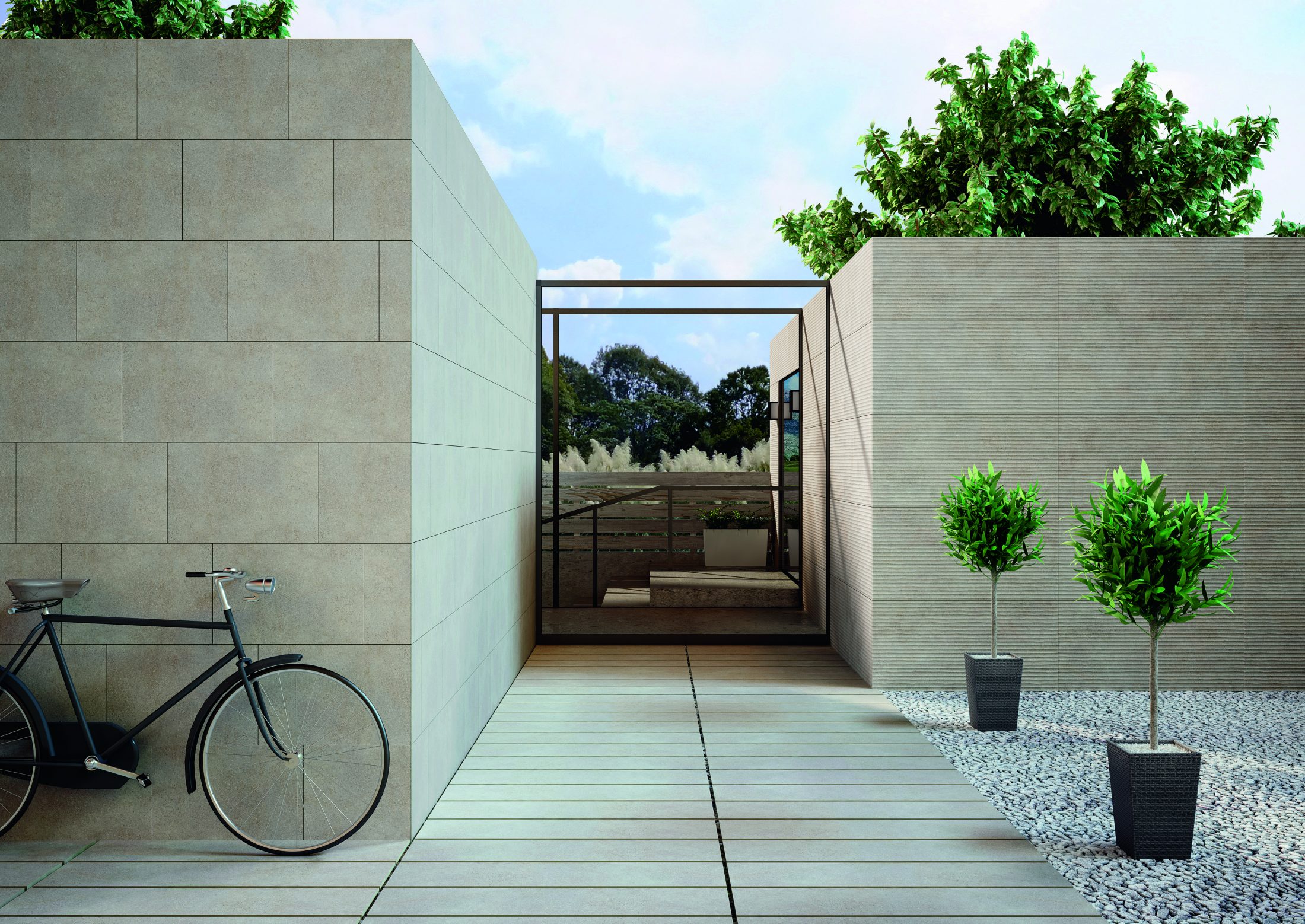 Calcita pavers from the Livermore collection by Rocersa Ceramics. Photo courtesy of Tile of Spain.

These paving materials are the perfect solution for transitioning from indoor to outdoor spaces, so most manufacturers are now making traditional mortar tile and then the exact same look in the 2cm so that you can do your interior in traditional tile and then transition to the exterior in a much more efficient way.

RF: Despite the quality of mass–manufactured tile, some clients are still reaching out to smaller artisanal factories where craftspeople are making the same traditional handmade terracotta and glazed wall tiles (azulejos) that they’ve been making for centuries. A small manufacturer was contracted some 30-40 years ago to refurbish the floor of the Aljafería Palace in Zaragoza, Spain. They had the notes from the production of the project, they knew the temperature and the recipe and what kind of kiln they had to use. They didn’t try to recreate the colors of the glazes but they preserved the overall look—allowing visitors to continue experiencing this great work of art. 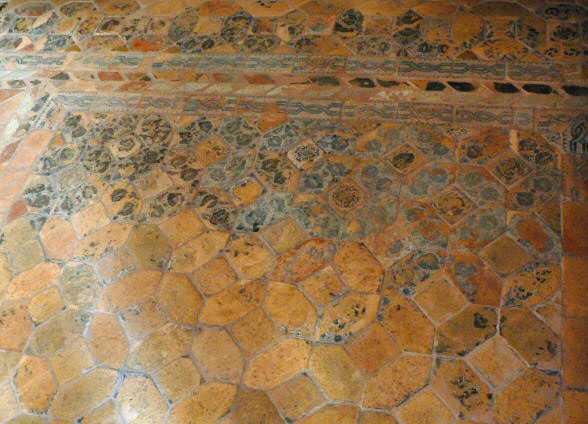 Floor of the Aljaferia Palace in Zaragoza, Spain. Photo by Ryan Fasan. 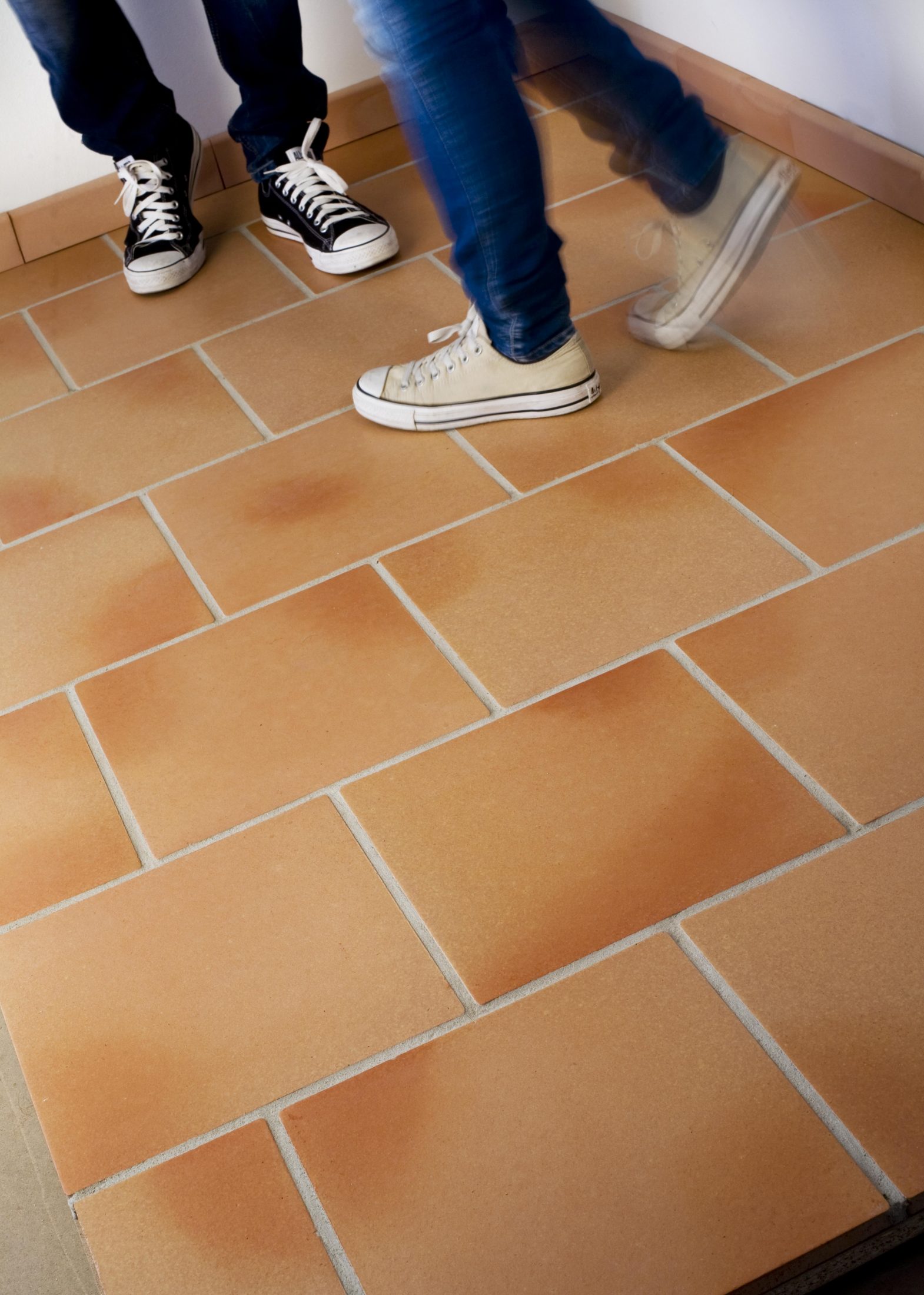 Due to the high durability and purity of Spanish red clay many of these historic buildings can be restored for generations to come. Today, you can get a mass produced porcelain that looks like it’s handmade, but it won’t develop the patina that traditional terracotta will, it doesn’t have the same brush strokes that a hand glazed decorative tile program has.

RF: Small format glazed wall tile is something that has been a Spanish specialty for centuries. One of the best examples of small format tile can be found in the extensive tilework of the palaces of the Alhambra in Granada, where geometric tile-mosaics form wainscotting about five feet high. 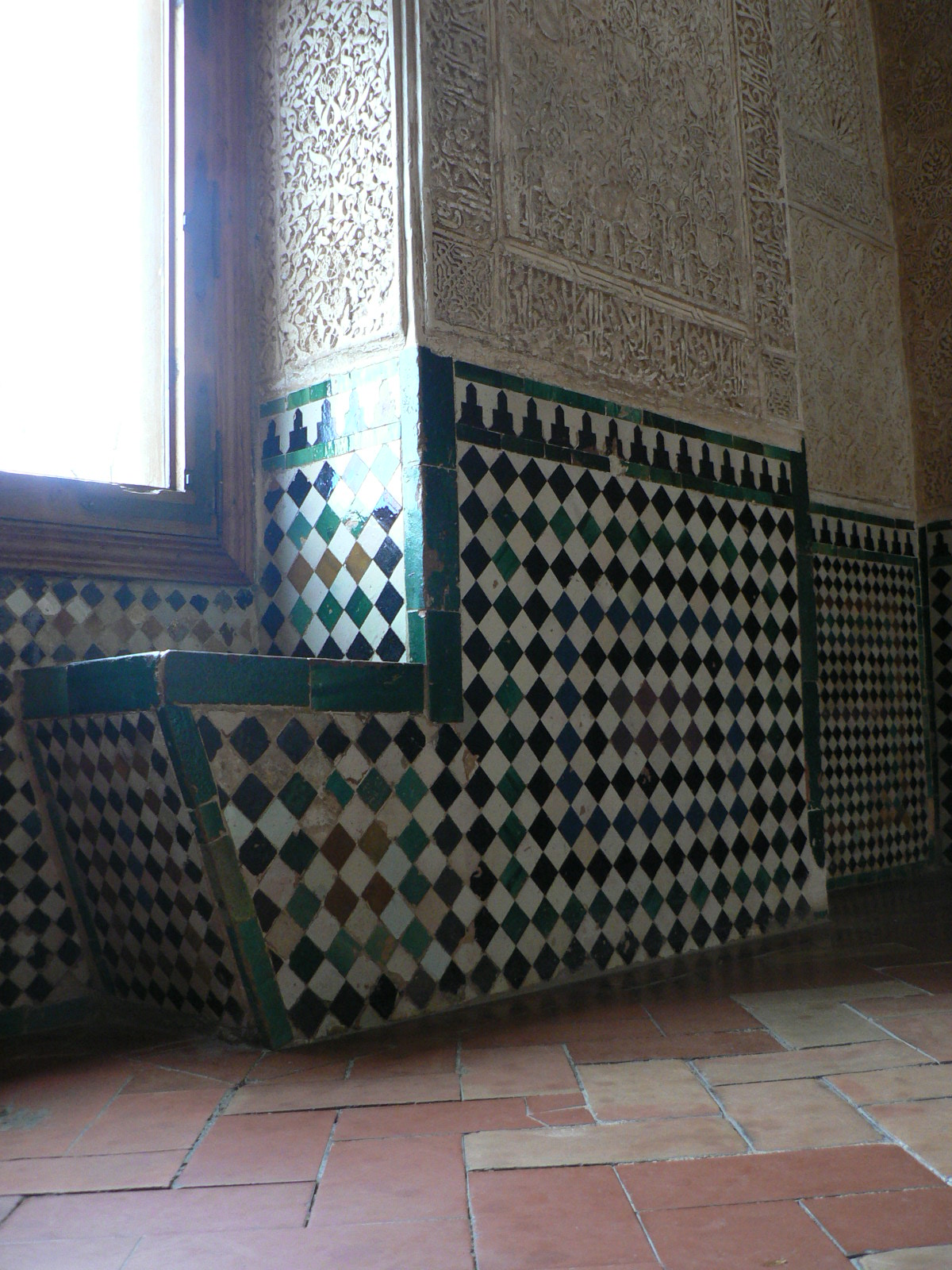 Small format glazed wall tile is something that has been a specialty of Spain for centuries. This bench in the Alhambra (Granada, Spain) shows classic Azulejos tile from about 700AD. Photo by Ryan Fasan. 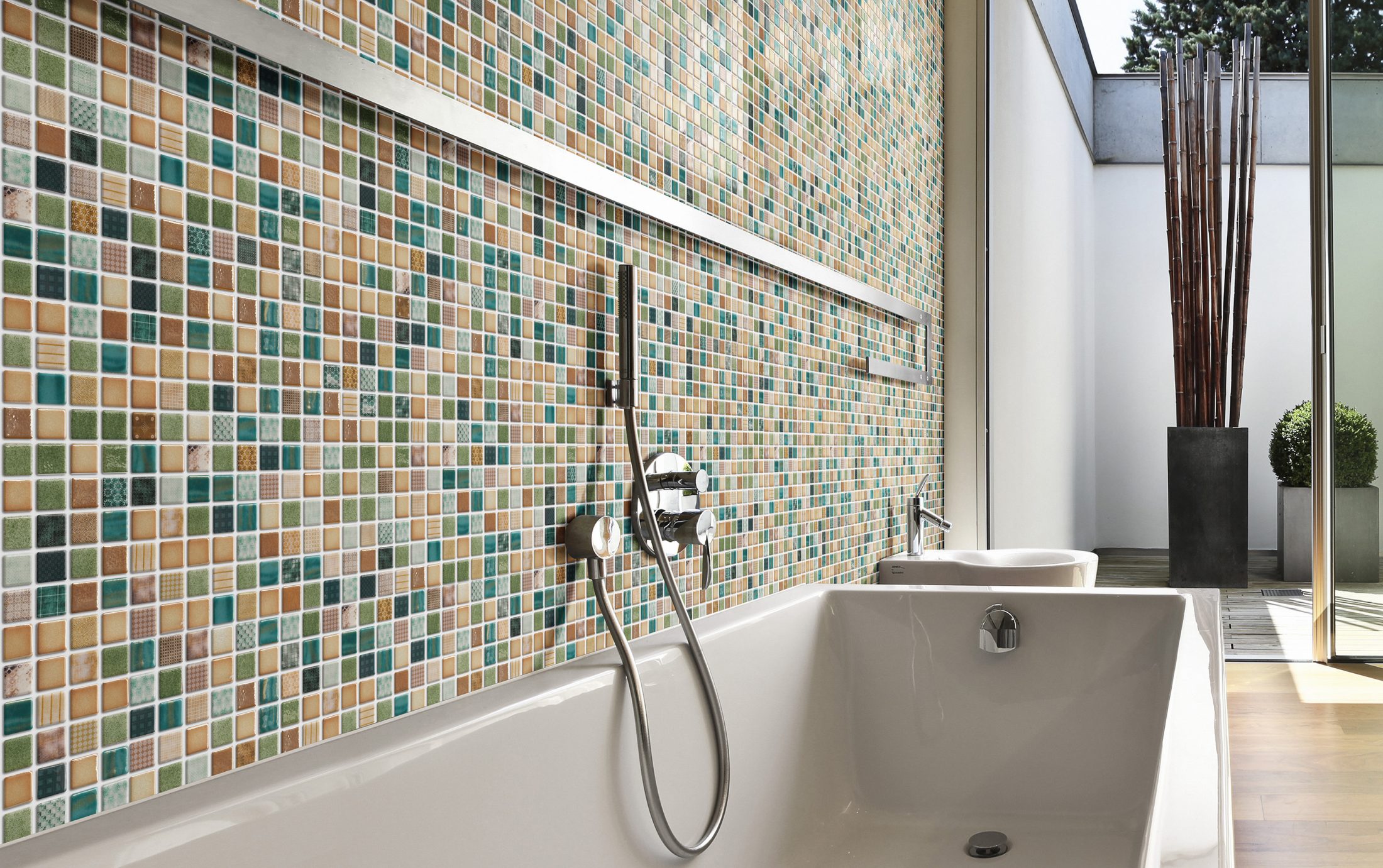 There’s quite a big resurgence in the popularity of small format wall tiles today with decorative packages and traditional trims. In America this has been a very strong trend and it’s only growing in its demands, gaining popularity elsewhere in the world because of its popularity in the United States. There is a certain cachet with the New York style, as it was the New York subway that influenced the very notion of “subway tile.” 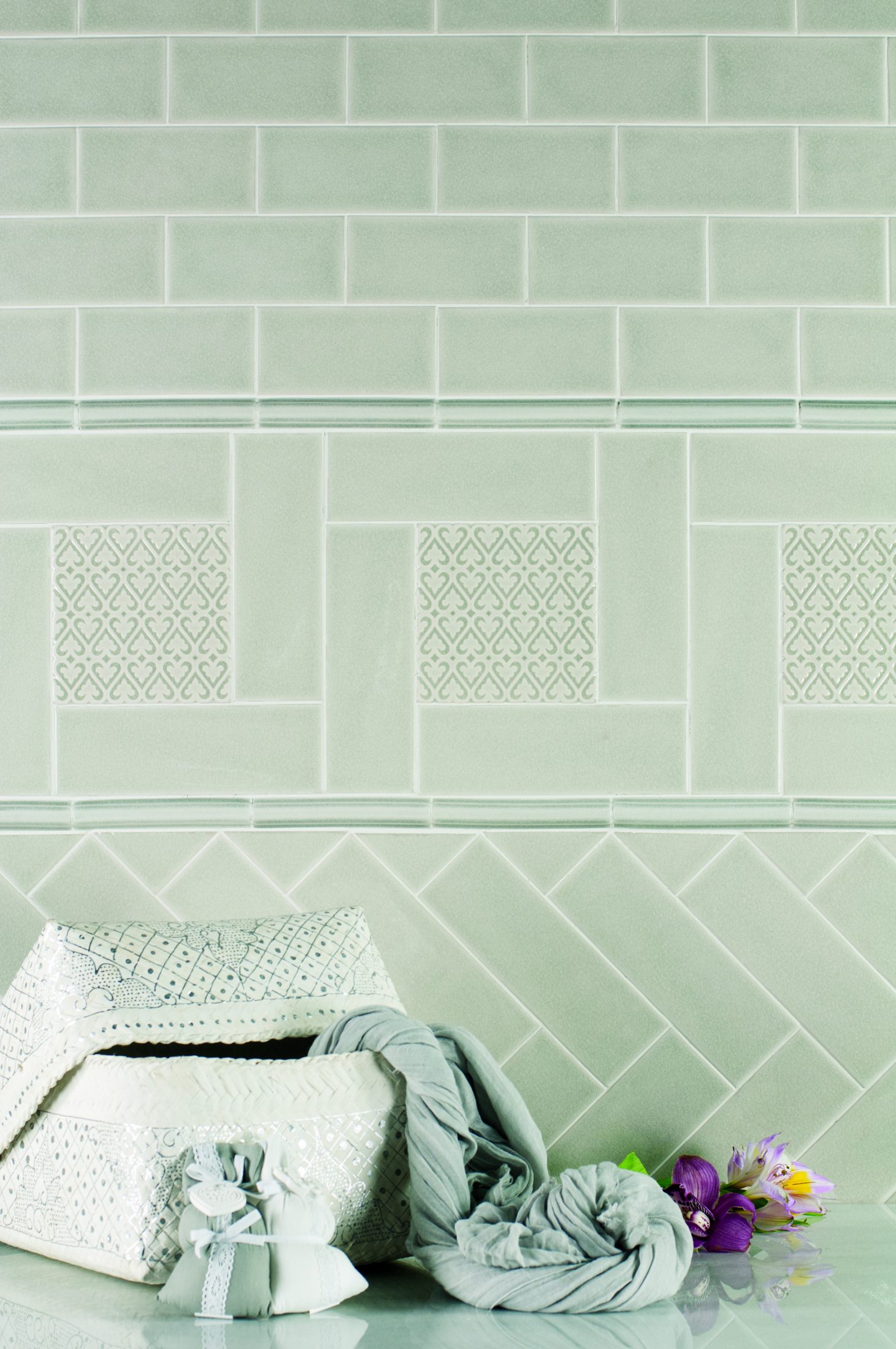 RF: At the turn of the 20th century encaustic cement tiles were used extensively for flooring across Europe. They employed very simple geometric patterns, usually in multiple colors of cement. Today, a lot of companies are either taking scans of traditional encaustics or digitally creating their own, recreating the look in high performance porcelain as opposed to cement. 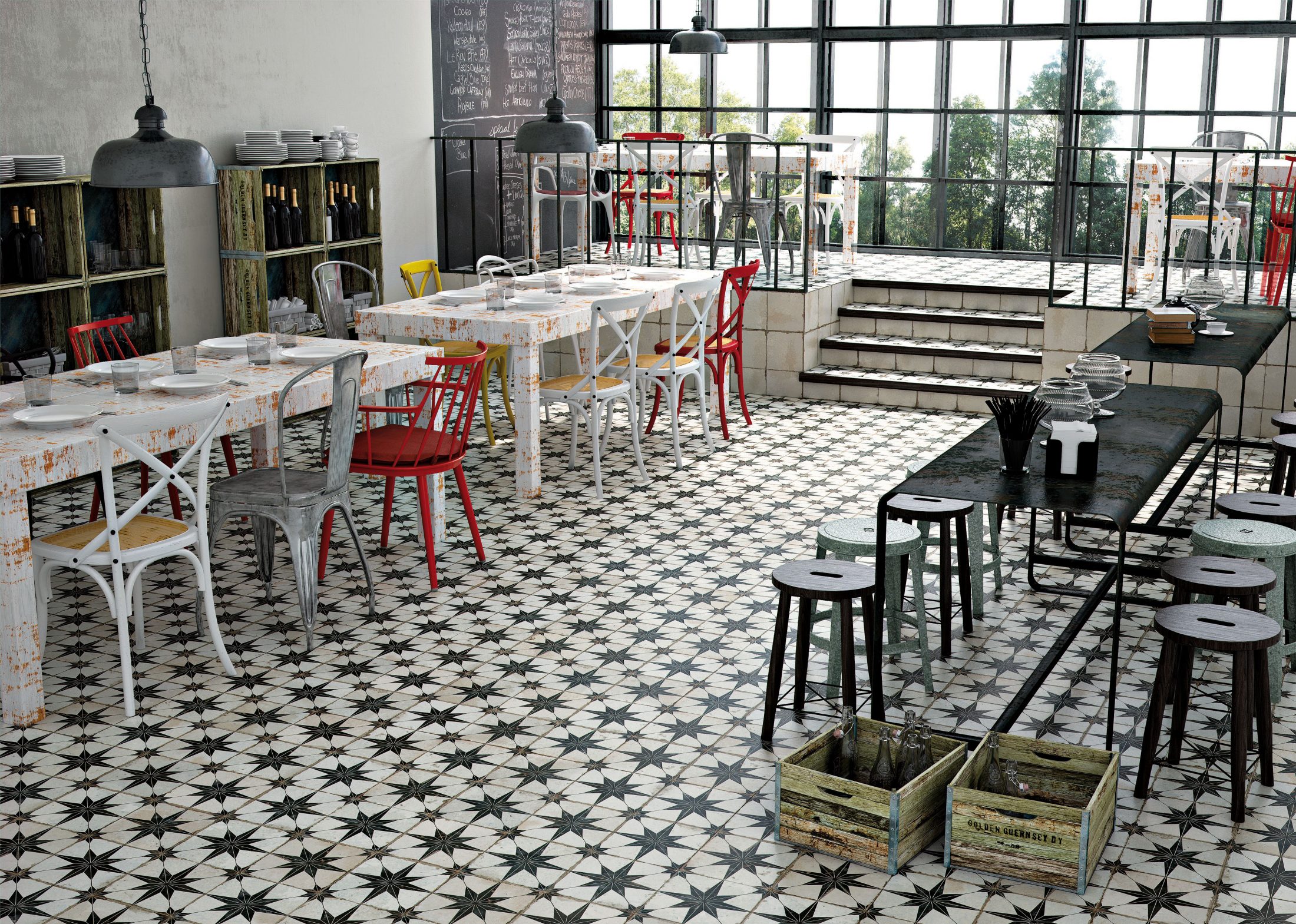 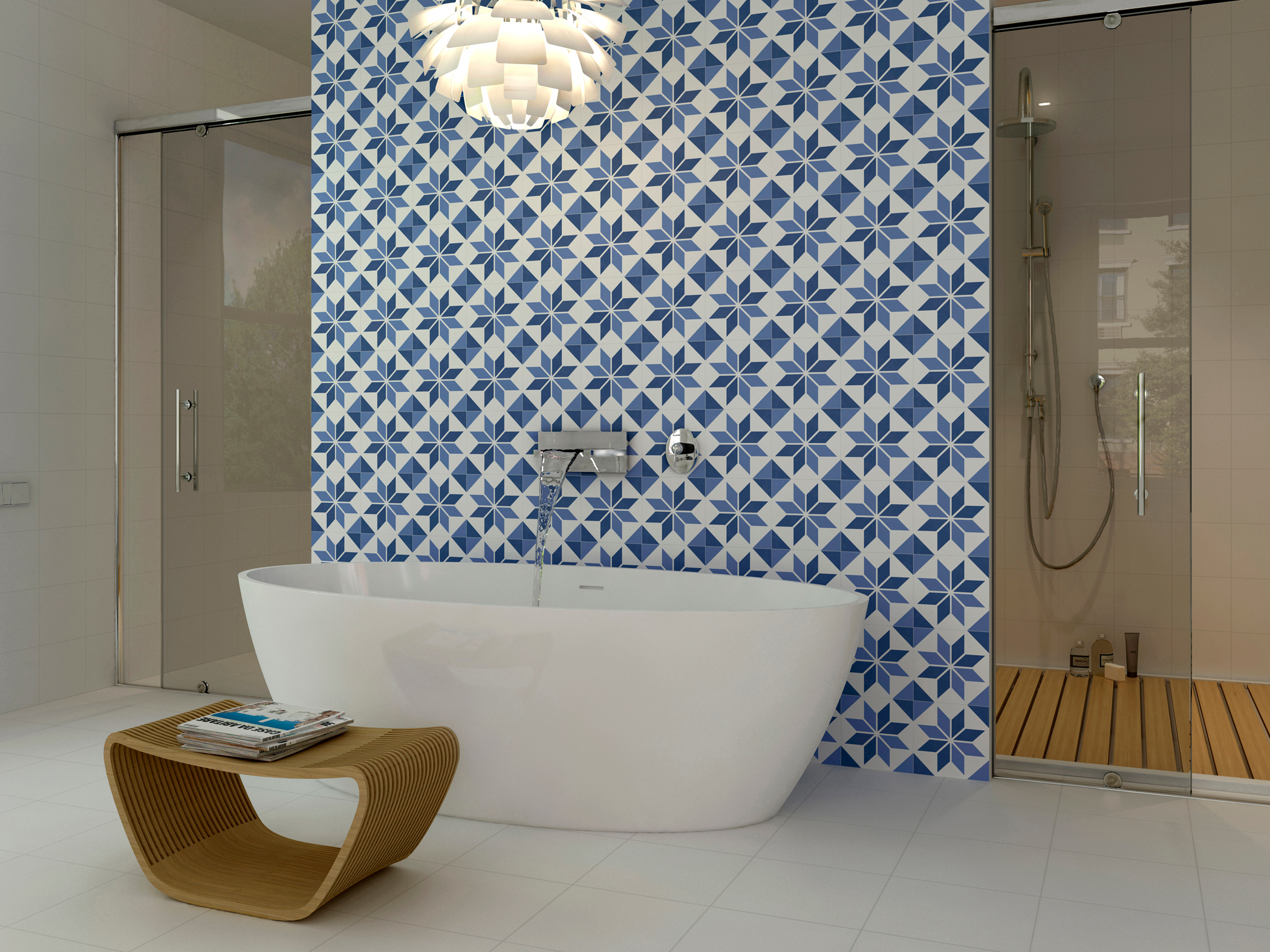