First prize in the Architecture category went to a two home project in Oropesa (Toledo, Spain). In the Interior Design category, the judges awarded first place to a restaurant on the ground floor of the Tabakalera Culture Centre in San Sebastian, Spain. The final degree project was awarded to M Wesam Al Asali from the University of Cambridge. Honorable mentions were also awarded to select projects. 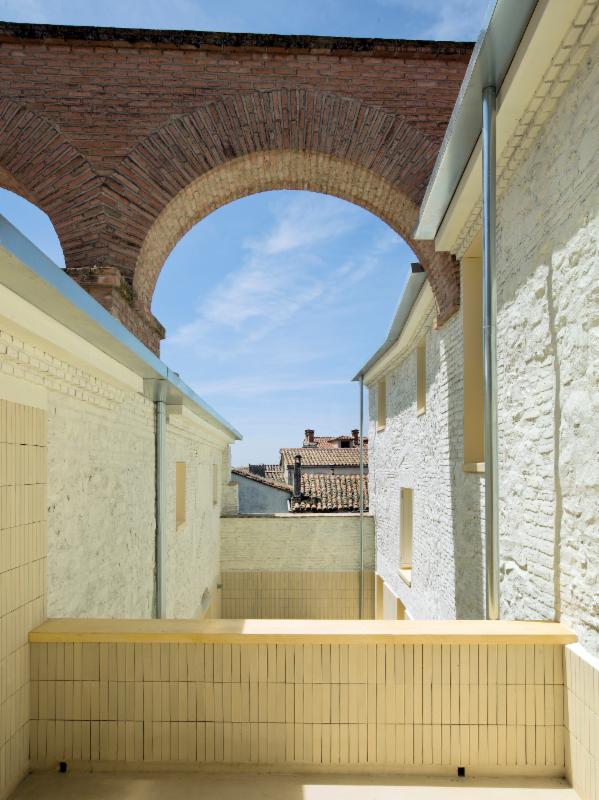 The panel of judges highlighted the outstanding precision of an architectural intervention within a complex historical context and a use of ceramic tiles that was fully fit for purpose. The use of ceramic tiles was not limited to a mere covering or finish, but instead as a material capable of enveloping the project and adding a unique appearance.

An Honorable Mention was given to ‘MM House, Palma de Mallorca‘ by Ohlab, a home designed in accordance with the passive house standard in order to guarantee optimum energy efficiency. The design featured a sloping roof finished with a white 15x15cm ceramic tile, chosen for three reasons: aesthetic considerations, maintenance, and easy roof cleaning for the collection and reuse of rainwater. 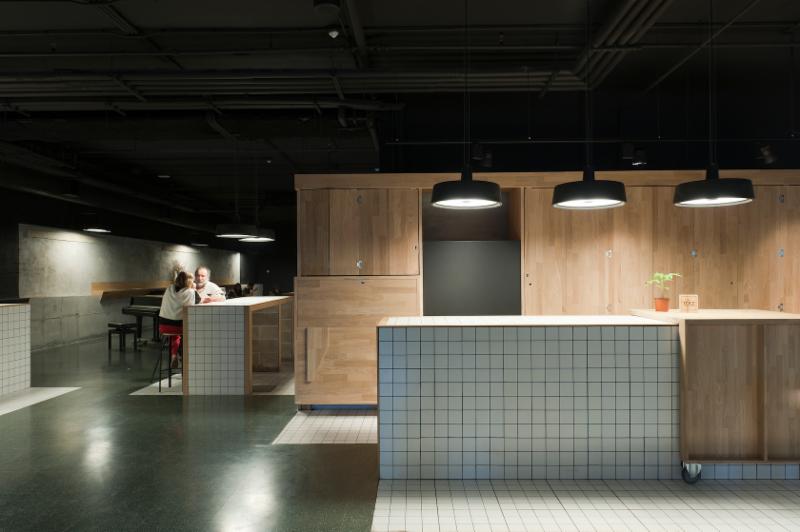 The judges referred in particular to the balanced dialogue created between the materials that showcased the use of ceramic tiles in a contemporary space which includes a coffee shop, pizza restaurant and wine bar. The space is situated on the ground floor of Tabakalera, San Sebastian’s new International Centre for Contemporary Culture. The floor and bars are covered with 10x10cm ceramic tiles in the style of rugs resting on the partition elements that stand between employees and customers.

An Honorable Mention was awarded to ‘Casa#77‘ by Raúl Montero Martínez and Emilio Pardo Rivacoba, a project to renovate an apartment measuring just 51 square meters situated in a housing block of Pamplona’s historic quarter.
First Prize in the Final Degree Project Category: ‘In-Situ: Tools and Technology in Traditional Architecture’ by M Wesam Al Asali, a student at the University of Cambridge.
The Tile of Spain Awards also includes a category for the best Final Degree Project undertaken by architecture students where ceramic tiles play a central role. The panel of judges awarded first prize to ‘In-Situ: Tools and Technology in Traditional Architecture‘ by M Wesam Al Asali. Taking into consideration the nature of the award, the judges unanimously highlighted the project’s strategy, which employs a single ceramic material to create a construction system in keeping with its function and location. The project addresses a current issue in an effective manner, generating added value to the landscape.
The judges also awarded an Honorable Mention to the project entitled ‘Como agua de mayo‘ by Belén Collado González, a student at the San Pablo CEU University in Madrid. The judges were particularly appreciative of the plasticity and sensitivity in terms of the use ceramic tile was put to.

More than a decade of Tile of Spain Awards

The Tile of Spain Awards, now in their fifteenth edition, boasts a magnificent trajectory that is widely acknowledged in the world of architecture. Both the prestige of the participating judges, and the standard of the winning projects, have turned these Awards, organized annually by ASCER, into a major event on the Spanish and international architecture scene.
For this edition, the Awards benefited from an exceptional panel of judges chaired by leading Portuguese architect Gonçalo Byrne, who has received a number of distinctions including the Gold Medal of the French Academy of Architecture and Rome’s Piranesi Award.
The panel also included Elisa Valero, Professor of Architecture Projects, Granada School of Architecture; Iñaqui Carnicero, visiting lecturer at Cornell University and organizer of the Spanish Pavilion exhibition at the XV Venice Biennale; José M. Milá,  designer and President of RED, the Spanish Association of Design Companies; Nuno Brandão Costa, leading Portuguese architect; Ricardo Sánchez Lampreave, lecturer, organizer of a number of exhibitions and a highly prolific editor of specialized media; and Ramón Monfort,architect and member of the Castellón College of Architects and who has been a member of the panel of judges at every edition of the awards.
The Tile of Spain Awards includes two main categories, Architecture and Interior Design, each offering cash prizes of 17,000 Euros each. The Final Degree Project category for graduating students of architecture awards winners with 5,000 Euros each.
Full details of the Awards are available at www.premiosceramica.com