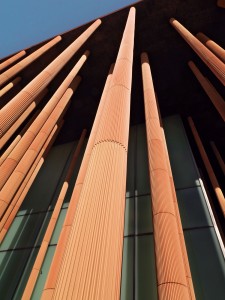 Valencia, Spain – Last winter, Tile of Spain posed a question to the American A&D community: Wanna go to Spain? The answer was a resounding yes. Tile of Spain launched the Reign in Spain A&D Tour program to select four architects and interior designers to participate in a free, week-long architectural junket visiting various regions of Spain and Cevisama. In 2011, the Reign in Spain will reign once more.
Reign in Spain A&D Tour
The Tile of Spain brand is jointly managed by the Trade Commission of Spain in Miami, FL and the Spanish Ceramic Tile Manufacturer’s Association (ASCER) in Valencia, Spain. The delegation will consist of six American journalists and the four Reign in Spain winners and coincides with Cevisama, the International Ceramic Tile and Bath Furnishings Show held in Valencia. The first half of the trip includes exploring a region of Spain to immerse in the local culture, sample Spain’s world-famous culinary arts, see notable sites and attractions that are of architectural and design significance and to gain a general understanding and appreciation for Spain. The latter half of the trip includes visiting Cevisama, factory and booth tours and a press conference.
Beginning November 1, 2010, interested parties can submit a entry at http://www.tileofspainnews.com/reigninspain. Deadline is December 1, 2010 to submit applications. The four lucky winners will be notified by December 10, 2010.
Preliminary Itinerary
Feb. 4           Leave the United States for Madrid, Spain.
Feb. 5-6        Travel to Zaragoza by Spain’s Alta Velocidad Española (AVE), a high-speed train network which is on track to become the world’s biggest network of ultra-fast trains. Spend a couple days exploring the culture and architecture of Zaragoza.
Feb. 7           Travel to the remote town of Teruel for a glimpse of extraordinary Mudéjar architecture.
Feb. 8-11      Off to Valencia, the business epicenter of Spain’s ceramic tile industry and the venue for Cevisama 2011. Spend time at the tradefair while also touring a ceramic tile factory. Additionally, the group will have a guided tour of Valencia’s City of Arts & Sciences, a monumental complex designed by world-renowned architect Santiago Calatrava.
Feb. 12         Depart for the United States via Madrid, Spain.
Qualifications
Accommodations Include:

The Spanish Ceramic Tile Manufacturer’s Association (ASCER) is the private organization whose primary objective is to support Spain’s ceramic tile manufacturers and the industry as a whole by stewarding and promoting the Tile of Spain brand worldwide.  A strong global leader, the ceramic tile industry of Spain comprises more than 220 manufacturers concentrated primarily in the province of Castellón.

For more about tile produced in Spain, contact Tile of Spain Center at the Trade Commission of Spain, 2655 Le Jeune Road, Suite 1114, Coral Gables, FL  33134. Call 305-446-4387 or visit tileofspain.com.
Promotion Official Rules:  NO PURCHASE NECESSARY AND NO PAYMENT WILL BE ACCEPTED TO ENTER OR BE SELECTED.  The promotion begins on November 1, 2010 and ends on December 1, 2010.  Odds of winning depend on the number and quality of applications received.  Participants are selected based on the information provided in the application and not by a random drawing or other element of chance.  The promotion is only open to legal residents of the United States over the age of eighteen (18) years.  Promotion sponsors are not responsible or liable for incomplete, late or lost applications or other applications not in compliance with the Official Rules.  Such applications will be declared void and discarded.  Selected participants must have a valid passport and sign an affidavit of eligibility and release of liability prior to taking the trip.  The approximate retail value of the trip is $5,000.  Cash value may not be selected as an alternate award under this promotion.  Neither the trip package nor any portion thereof may be exchanged, redeemed for cash, resold or transferred in any manner.  If any selected participant is unable to participate in the trip or violates or attempts to violate these Official Rules, the participant’s selection shall be revoked and declared void and an alternate participant will be selected. All applicable federal, state, local, and other income taxes are the sole responsibility of the selected participants. To obtain a list of the selected participants, please send an email after March. 1, 2011 to: miami@mcx.es. The Official Rules are final and binding in all respects. Promotion sponsored and produced by ASCER / Trade Commission of Spain. Void where prohibited.